“Blue” is the concept for an exhibition which will premiere at Lowe Mill Art Center in Alabama in September 2017. It was imagined and curated by Karen Graffeo.

Conceptually the show is informed by Rebecca Solnit’s writings from the book A Field Guide to Getting Lost. An essay below gives a review of the book and introduction to the history, mystery, and metaphors associated with Blue.

In A Field Guide to Getting Lost — that sublime meditation on how we find ourselves in the unknown — Rebecca Solnit examines the color blue and its relationship to desire in an exquisite essay that begins with the scientific and blossoms into the poetic:

“The world is blue at its edges and in its depths. This blue is the light that got lost. Light at the blue end of the spectrum does not travel the whole distance from the sun to us. It disperses among the molecules of the air, it scatters in water. Water is colorless, shallow water appears to be the color of whatever lies underneath it, but deep water is full of this scattered light, the purer the water the deeper the blue. The sky is blue for the same reason, but the blue at the horizon, the blue of land that seems to be dissolving into the sky, is a deeper, dreamier, melancholy blue, the blue at the farthest reaches of the places where you see for miles, the blue of distance. This light that does not touch us, does not travel the whole distance, the light that gets lost, gives us the beauty of the world, so much of which is in the color blue.”

“For many years, I have been moved by the blue at the far edge of what can be seen, that color of horizons, of remote mountain ranges, of anything far away. The color of that distance is the color of an emotion, the color of solitude and of desire, the color of there seen from here, the color of where you are not.” Solnit closes with a return to the overpowering duality of distance, at once destructive and generative:

“The blue of distance comes with time, with the discovery of melancholy, of loss, the texture of longing, of the complexity of the terrain we traverse, and with the years of travel. If sorrow and beauty are all tied up together, then perhaps maturity brings with it not … abstraction, but an aesthetic sense that partially redeems the losses time brings and finds beauty in the faraway.”

This show embraces the life connection of each artist through all the metaphors and concepts for blue directly informed by Rebecca Solnit’s marvelous book. Artists include: 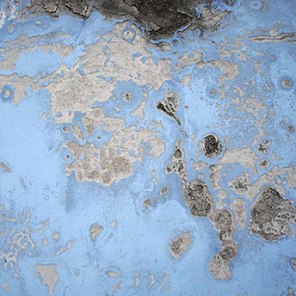 “Live always at the ‘edge of mystery’—the boundary of the unknown.”

– Robert Oppenheimer referenced by Rebecca Solnit In A Field Guide to Getting Lost.

Maps are created to define charted territory and to help us from getting lost; maps identify our location in relation to our environment; maps give us directionality and scale; maps guide us.

Conceived for the “Blue” exhibition, Terra Incognita I originates from a series of photographs taken this summer of an electric blue wall with aging plaster at a defunct tuna factory adjacent to the Ionian Sea in Southeast Sicily. The natural formations on the surface caused by exposure to the elements and the characteristics of the wall material already resembled a map, and were selectively defined in the drawing. During the navigation of the paper, as the pencil line traveled forward, I found myself at times lost and unsure where my explorations would arrive. The end result is an imagined land and sea with uncharted territory, somewhere between the familiar and the fantastic where neither scale nor location is referenced. It is an unrecognizable place created by the haziness of memory, an altered landscape, an anonymous destination not yet consciously determined.

The opening reception will be Friday, September 1 with simultaneous openings of Cuba Soul Deep and University of Montevallo art student/alumni exhibitions in the other two galleries at Lowe Mill. It is an amazing huge public art space that used to be a textile factory and is now a thriving center with studios, restaurants, and theaters.