Last Friday, I went to Bologna with a group of SACI graduate students and instructors. We went to see the exhibition Ghost House by American artist, Lawrence Carroll, at the MAMbo. Born in Australia to an Irish mother, Carroll grew up in different parts of the US and chooses to relocate with his family every few years to another city to “get out of his comfort zone.” He grew up in California and has lived and worked in studios in LA, Michigan, NYC and the East coast, Venice, and now is based in Umbria near Orvieto. He very graciously agreed to meet with us and talk about his work and his life as an artist.

Lawrence is one of those artists you can call on a first name basis and go grab a coffee to chat. He encourages conversation and story telling and claims that is how he gets a lot of his inspiration, along with random but significant moments which happen while simply experiencing life, such as remembering when he first held his infant daughter in his arms or contemplating a frozen bird bath in the middle of winter (the motivation for his “frozen” ice paintings). His work is a lot about feeling and poetry, of which he reads frequently. The title of the exhibition at MAMbo comes from Ghost House, a Robert Frost poem. 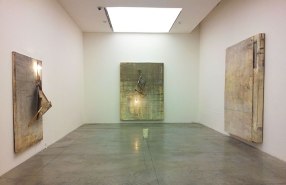 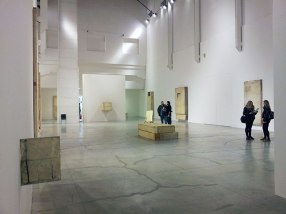 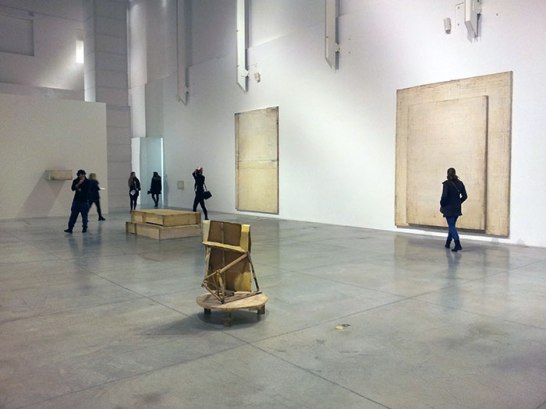 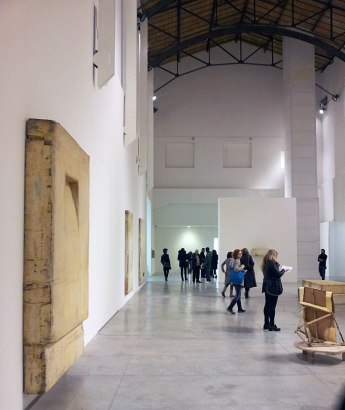 The exhibition of more than 60 works produced by Carroll between the mid-1980s to the present, traces the artist’s evolution over more than 30 years. Ghost House is installed in the grand and intimate spaces in the museum creating environments “built on memory,” according to the artist. He admits to rarely having much of a plan for his installations and goes on a feeling based on the relationships between each work and the spaces themselves. He in fact, enjoys spending time in his own exhibits to study these relationships and narratives each exhibition installation creates.

I first noticed Carroll’s work at the Venice Biennale in 2013 at the Arsenale and it struck me as bold yet elegant in its use of materials, creating layers of memory with subtle visual references, delicate marking and choice of palette. It was great to be able to meet him in person and hear his story.

Carroll was trained as an illustrator, but after university, he changed direction to follow his real passion — painting. He moved to NYC, got a studio and spent endless hours studying the masters, the moderns, and contemporary art at the museums and galleries around the city. He eventually found his own artistic language in which to communicate and relate to the world outside of his studio — a place where Carroll lives and dedicates his life work to. He cannot stress enough to young artists the importance of looking, thinking, and making, spending time in the studio, following ones ideas, and expecting failure before success can be achieved.

Carroll considers his works as paintings, even though many are sculptural and dimensional, and do not even hang on the wall. One of the painters he admires the most was a great master of 20th century painting, Giorgio Morandi, of which the MAMbo and the Museo Morandi in Bologna highlight. Carroll also told the stories of how he, as a young artist, met some influential painters such as Robert Rauschenberg and Alice Neel.

The catalog for the exhibition is beautifully designed by the artist himself, as well as the free newspaper associated with the exhibition. After his studio has been emptied for an exhibition, Carroll uses this gap moment of “loneliness” to create and publish a newspaper. Another way of communication, it also acts as a transition to the next step back into the studio which can at times be daunting after a body of work has culminated. Never-the-less, the studio is where Carroll feels most at home, where ever he is.