Florens2012 was an International Biennial of Cultural and Landscape Heritage that took place in Florence, Italy, November 3-11, 2012. I was asked to participate as a blogger to report on some of the topics and discussions presented during the conference. For more information on how to attend the multitude of events, the Florens Foundation website.

On November 4 in the Salone dei Cinquecento of the Palazzo Vecchio, there was an interesting discussion held in Italian called Museums: Exhibitions, Communication, Languages: This conference is an opportunity to discuss the role of museums as contemporary instruments of sociality. Smart cities are going in a direction that provide a chance for museums to create accessibility between content and visitors, and a new equilibrium between the quantity of information and the ability to communicate it. These are unavoidable changes; museums must be places of knowledge in which the community’s history, region and language become pathways that connect the needs of citizens and visitors. The web is a virtual place in which diverse communications combine until they become a larger concept that transforms museums into participatory and defuses places.

For the last session concentrating on language, I’m talking, can you hear me? Museums and Languages, Massimo Negri, Scientific Director of Genus Bononiae, began the discussion using the new Museo della Storia di Bologna in Palazzo Peopli as a case study. This museum, inaugurated in January of this year, is part of Genus Bononiae – Museums in the City, a new cultural, artistic and museum itinerary running through 8 buildings in the historical center of Bologna that have been renovated and rehabilitated for public use creating museums on an urban scale. Negri introduces the museum saying that a contemporary museum space must attract all of the senses, considering both technical and conceptual approaches. Exhibitions in museums may have urbanistic, sociological, and political concepts. The perfect museum context is like “tuning into a radio station.” Museums need to have a large repertoire of instruments to communicate with its patrons in addition to what is hanging on the walls. In display cases, the choice was made to limit the amount of objects so as not to overwhelm the viewer. Two important considerations of an exhibition are how the subject matter is installed and how it is illuminated. 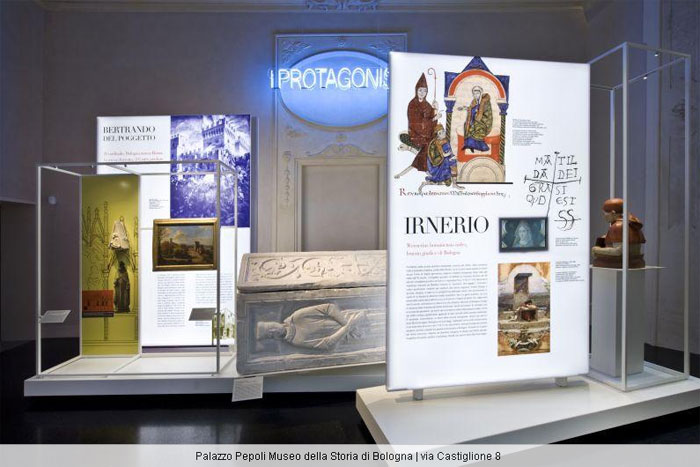 There are multiple ideas and techniques to approaching exhibition design with various materials, technology, and graphics. As far as lighting, there must be an equilibrium of 5 different types of illumination: natural light, LED lights, lighting for texts and signage including neon, light emissions from LCD screens, and security lighting.

The spaces created in the museum space should communicate, tell stories, and transport the visitor into an intensely rich context. What may not be obvious to the visitor is a sense of psychological tension in the museum path, with a “stop and go” rhythm. There must be exciting moments of theatrical dimension combined with areas which allow the viewer to “breathe” and speculate, to absorb the content. The integration of theatrical spaces, in the sense of scenic multimedia zones entertain the viewer and allow visitors to engage in the subject matter. The contemporary visitor is a multi-tasker who needs sensual stimulation that can maintain short attention spans. 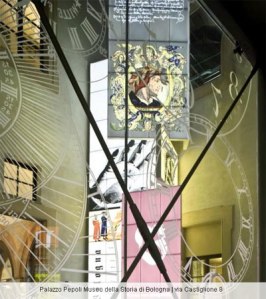 The ambiance of the museum also should be multilingual, if possible, translated into more than one language. The language of a museum is not simply limited to text, but is a layered “club sandwich” of elements including text, images, video, sound, illumination, and the objects on display.  These elements need to been composed into a symphony of tastes, and when done poorly, the result can really backfire. In the case of the Museo della Storia, text is translated from Italian into other languages through the use of digital apps and printed brochures. The decision to use only Italian text on the walls of the museum was made to reduce the amount of text on the walls which could visually disrupt the display. In addition, there is a program to integrate children into the museum using their own “language.”

Museums also need to have diverse forms of outreach. One example can be the coordination of related displays throughout the city in shop windows, perhaps attracting potential visitors. Some museums have interactive areas where the visitor can participate hands on, creating a sort of “I was here” signature mark. Sometimes, this is inside the museum, other times, this form of live communication can be present on museum blogs, social media, and other forms of internet outreach.

Martina De Luca, from the Galleria Nazionale d’arte Moderna e Contemporanea (GNAM) commented that the museum visit needs to be an experience that is geared toward a diversified public. Museums in general need to be accessible to the entire community on three levels: physically, economically, and on a cognitive level. Museum visits are competing with other free-time options. The museum should not be an exclusive Utopian temple only appealing to a select few, but should be educative experience for everyone. Although museum visitors grossly tend to be a higher educated crowd, the museum needs to know who their public is and attempt to create a connection with the creative and historic patrimony. The content of an exhibit needs to depart from the public’s participation and response. In addition, this experience can explode on social media and personal reporting. There needs to be a dialog with a contemporary public.

Luca Basso Peressut, coordinator PhD program for Interior Design and Exhibition Setup, Milan Polytechnic Institute, and of MeLa Project, states that museums need to look at global culture and anthropology. The MeLa project “aims to delineate new approaches for museums and libraries in a context characterized by the continuous migration of people and ideas. Its main objectives are to advance knowledge in the field and to support museum and library communities, practitioners, experts and policymakers in developing new missions and forms of museums and libraries in the age of migration.” The contemporary museum needs to “get to the streets” and should be based on demographic considerations and different points of reference. This type of outreach could literally include street art and installations that are in public spaces. One example that works is the SFO Museum in the San Francisco International Airport which by default of its location reaches 40 million people per year that travel through the airport and have leisure lay-over time while traveling. The SFO Museum is a fine example of a diversified museum that creates dialogues with its range of viewers that are as diverse as their displays. Another example is the Immigration Museum in Melbourne which creates community generated exhibitions.

Alessandro Goppion, Director and Administrator of the Goppion Museo-Technical Workshop in Milan, pointed out that there are infinite types of museums and diverse exhibition concepts. In many contemporary museums, there is an important language of space, architecturally and physically. A visual reference and context is very important.

Claude Benassai of the Misericordia di Firenze stressed that the language in which the material is presented is incredibly important and should be simple language, understood by all public levels. She gave a poignant example, showing this video called The Power of Words. 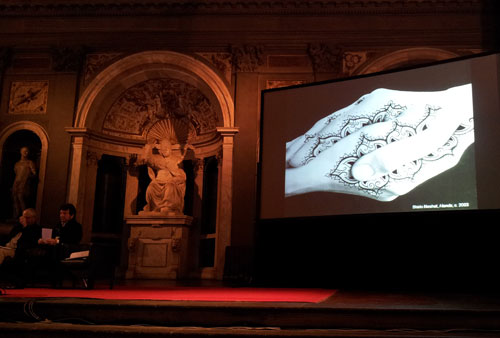