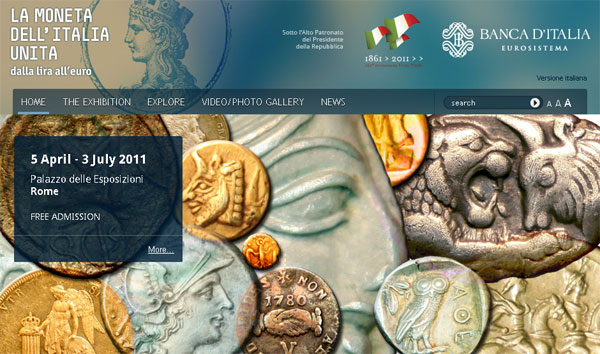 If you happen to be in Rome, there is a fascinating exhibition called “La Moneta dell’Italia Unita dalla lira all’euro,” until July 3, 2011. You actually don’t have to exchange any coins to see it because it’s free! Even I get nostalgic about the Lira because when I arrived in Italy, it was still in use. The US$ was seeing better days and with the extra zeros in the Lira value, one felt like a millionaire, literally! When Italy conformed to the Euro in January 2002, prices of almost everything (except salaries) pratically doubled in the conversion, almost as if those paying the doubled prices didn’t realize it – especially the elderly nonni. The new currency seemed like Monopoly money.

The Lira was formally adopted in 1860 after Vittorio Emanuele II signed for the unification of a monetary system. Previously, there were numerous systems depending on each territory and government. These monies included scudi, carlini, ducati, soldi, piastre, fiorini, baiocchi, grana, tornesi, quattrini, zecchini, and many others. In the territories that formed in 1861, there were 282 different coins in circulation! Imagine how confusing it must have been to decifer from city to city, borgo to borgo within the Regno d’Italia how prices calculated to each currency as if one was travelling between different countries – rather like traveling within Europe before the Euro. Italy as a country became unified in 1861 – this year celebrating the 150th anniversary. The use of paper banknotes grew only 8% of circulation in 1861 to over 40% by 1866.

In producion new coins, however, the Parliament was undecided between gold, silver, or bimetal materials. Gold discoveries in California and Australia actually lowered the price of gold in relation to silver, so it was decided to use the gold “aureo” measurement unit. None-the-less, in 1865, political ties with France pushed Italy to use the bimetal system. In 1873, the aureo system began to be used due to Germany’s decision to use it.

Coins and banknotes were initially fabricated by private and foreign producers. As technology advances, they need to be more difficult to falsify. Some of today’s systems are based on these antique machines. The graphic images and symbols seen on coins and banknotes from antiquity to today’s currency can be amazingly beautiful and intricately layered with graphics, textures, watermarks, and other anti-counterfeit devices.

The Currency of Unified Italy: From Lira to Euro
5 April – 3 July 2011
Palazzo delle Esposizioni
Entry from the steps at Via Milano 9A – 00184 Rome

Here are some pendants I have made using out-of-circulation vintage Lira coins, maps, and quartz.